Survivor bias is a form of selection bias 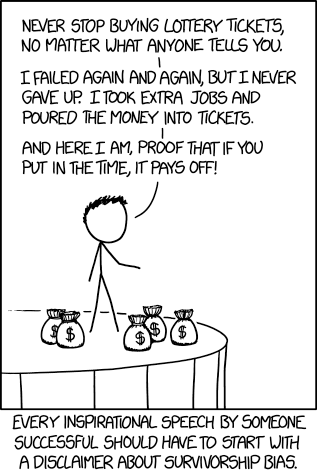 "They don't make 'em [them] like they used to"
it is inevitable that only those items which were built to last will have survived into the present day. Therefore, most of the old machinery still seen functioning well in the present day must necessarily have been built to a standard of quality necessary to survive.
Everything that has failed over the intervening years is no longer visible to the general population as they have been junked, scrapped, recycled, or otherwise disposed of.


Success in sports or acting or business


During World War II, the statistician Abraham Wald took survivorship bias into his calculations when considering how to minimize bomber losses to enemy fire.[10] Researchers from the Center for Naval Analyses had conducted a study of the damage done to aircraft that had returned from missions, and had recommended that armor be added to the areas that showed the most damage.[citation needed] Wald noted that the study only considered the aircraft that had survived their missions; any bombers which had been shot down or otherwise lost had logically also been rendered unavailable for assessment. The holes in the returning aircraft, then, represented areas where a bomber could take damage and still return home safely. Wald proposed that the Navy reinforce areas where the returning aircraft were unscathed[10]:88, since those were the areas that, if hit, would cause the plane to be lost. His work is considered seminal in the then-nascent discipline of operational research.[11]
As another example, when the brodie helmet was introduced during WWI, there was a dramatic rise in field hospital admissions of severe head injury victims.[citation needed] This led army command to consider redrawing the design, until a statistician remarked that soldiers who might previously have been killed by certain shrapnel hits to the head (and therefore never showed up in a field hospital), were now surviving the same hits, and thus made it to a field hospital.


So how does this help us


It’s important to remember that just because you see someone that is successful doesn’t mean that if you do what they did that you will be successful. You need to look at all the people that followed that path and see what happened to them


Usually this is shown to argue that everyone should go to college, and more dangerously, that any debt you have to go into to go to college is worth it for the payoff at the end.


The problem is that it only shows graduates and doesn’t include the people that went to college but didn’t graduate. People who get into a lot of debt and then don’t graduate end up in really bad situations.


If you just follow the story given you might go to college by taking out a large student loan and then either not graduate or get a degree in a field that doesn’t pay you enough to pay off your student loan.


What you should do is recognize the survivor bias and instead decide what you want to do and then figure out what you need to do to get there. Then you can estimate what you can expect to be paid and then you can figure out how much it is worth paying to get that job.


If you had to pay $100,000 to get a degree where you are going to be a teacher, you might want to find a cheaper way to get the degree.


If they listen to the professional players and do what they do hoping to get the same results they will hear things like “Practice all the time”, “always push yourself to be better”, etc.


Well guess what, there are thousands of people that do that and most of them never become professionals.


So is it worth it to spend much of your life practicing one skill that has so little chance of a payoff?


Maybe, maybe not, but don’t be fooled by survivor bias.


When evaluating a course of action, look at the outcomes of everyone who followed that path, not just the survivors.
Posted by Joseph Ward at 6:00 AM

Email ThisBlogThis!Share to TwitterShare to FacebookShare to Pinterest
Labels: Podcast